visit our little sister in Tuscany...

The small town of Naturns is nestled between two gorgeous mountain ranges, the Ötztal Alps and the Ortler Alps in South Tyrol. The major attractions of the area include:

The Texel Group Nature Park is one of the best kept secrets of South Tyrol. The park’s southern tip is within walking distance from La Vimea hotel. 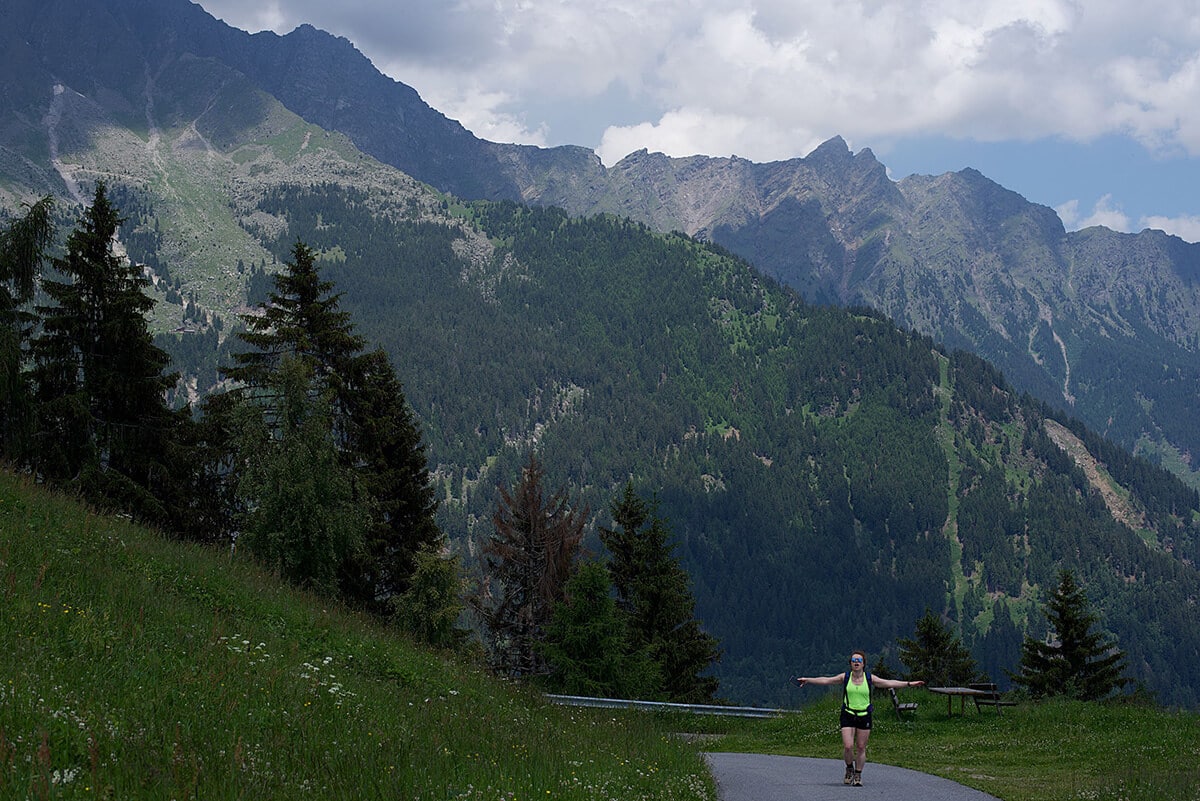 The Park is the largest park of South Tyrol. This area is a paradise for hikers having several cable cars to access the altitude and enjoy the beautiful trails. “L’alta via Meranese” or the High Merano walk is almost 100 km long. The complex of the Sopranes lakes is the peculiarity of the Texel Nature Park. This tricky arrangement of high altitude lakes (approx. 2000 m a.s.l.) is the largest in South Tyrol. The breathtaking view on these lakes opens from Rötl mountain 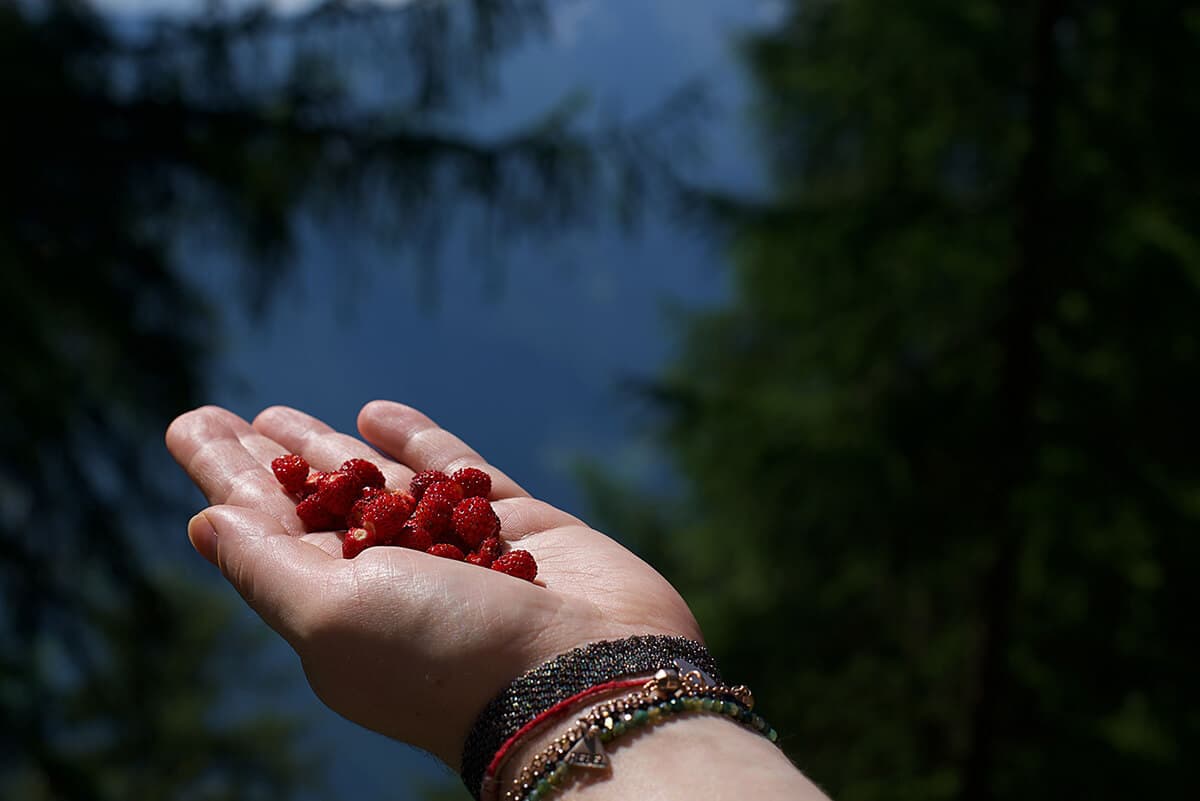 Another beautiful spot to be visited is the waterfall of Parcines located just above Salten town and 15 minutes by car from La Vimea with free parking on the site.

In the Texel mountain area, there are frequently found traces of man. The oldest known is “ötzi” – the ice man. His 5,000-year-old mummy was found in 1991 on the east side of Finale peak.

To start exploring the Texel Group, we suggest taking the Unterstell cable car to effortlessly reach 1,265m a.s.l and walk the southern slopes of the Texel Group up to Texelbahn upper station. To get inspired, take a look at the webcams up here. 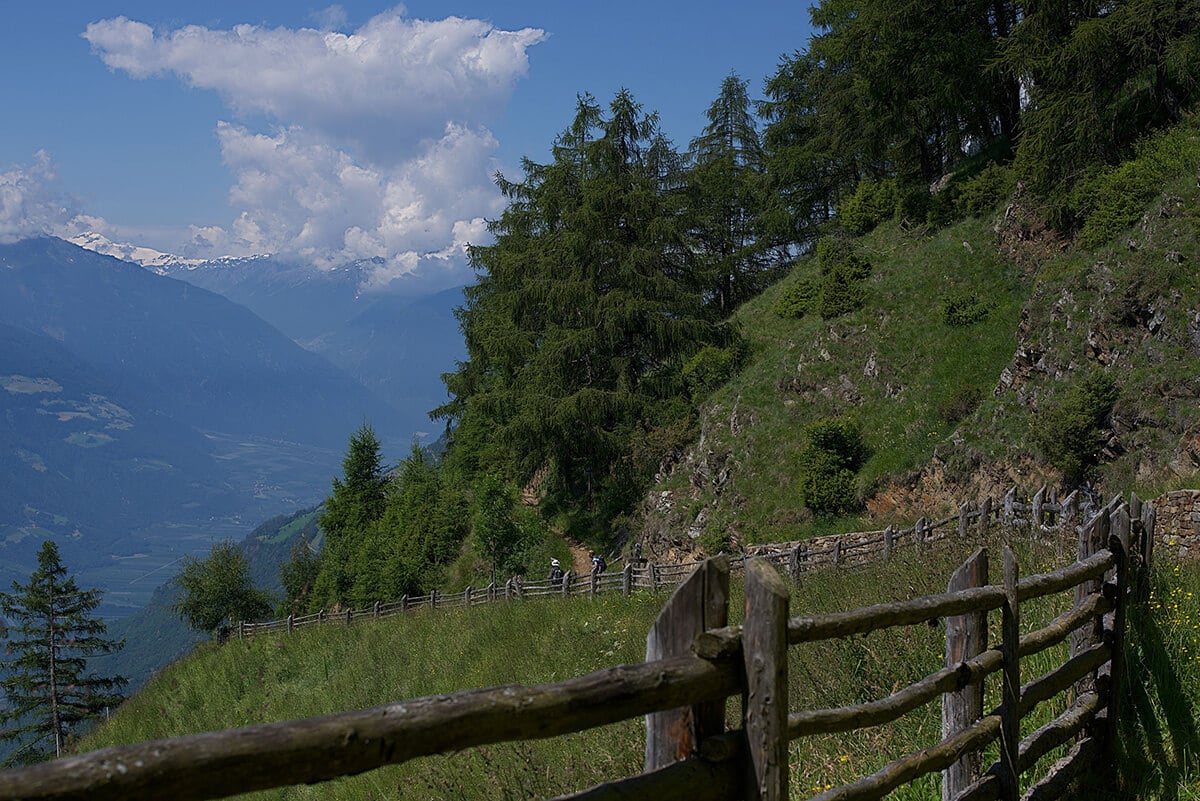 The Unterstell – Texelbahn trail is 8,5 km long and will take at least half a day. Apart from the stunning views of the valley all along the trail, there are numerous points of interest: the Unterstell viewing platform, a thrilling suspension bridge, the 1000 steps gorge, and the Klettergarten Huafwond panorama. At the end of the trail take Texelbahn cable car to descend to Partschins and then a bus to return to Naturns.

Naturnser Hochwart dominates the town landscape to the south. It is a 2,608m giant with spectacular panorama at the summit. The trailhead at the Kreuzbrünll parking area (1,578m) allows convenient access to the mountain.
[PeakVisor labeled Naturnser Hochwart as seen from La Vimea or from Adige river]

Spectacular scenery and long lasting memories are guaranteed for those going for a hike in the largest national parks of the Alps. Driving to the legendary Stelvio Pass is a must-do.

The area around Naturns is famous for medieval castles and the most spotted is the S. The history of this castle started in the 13th century. Right now, the castle became the residence of Reinhold Messner and transformed into Messner Mountain Museum.

Naturns’ castle is located around the corner, just 1 km above the hotel. It is privately owned and cannot be visited, still the view from the hill on Naturns and the Adige river is a feast to the eye. 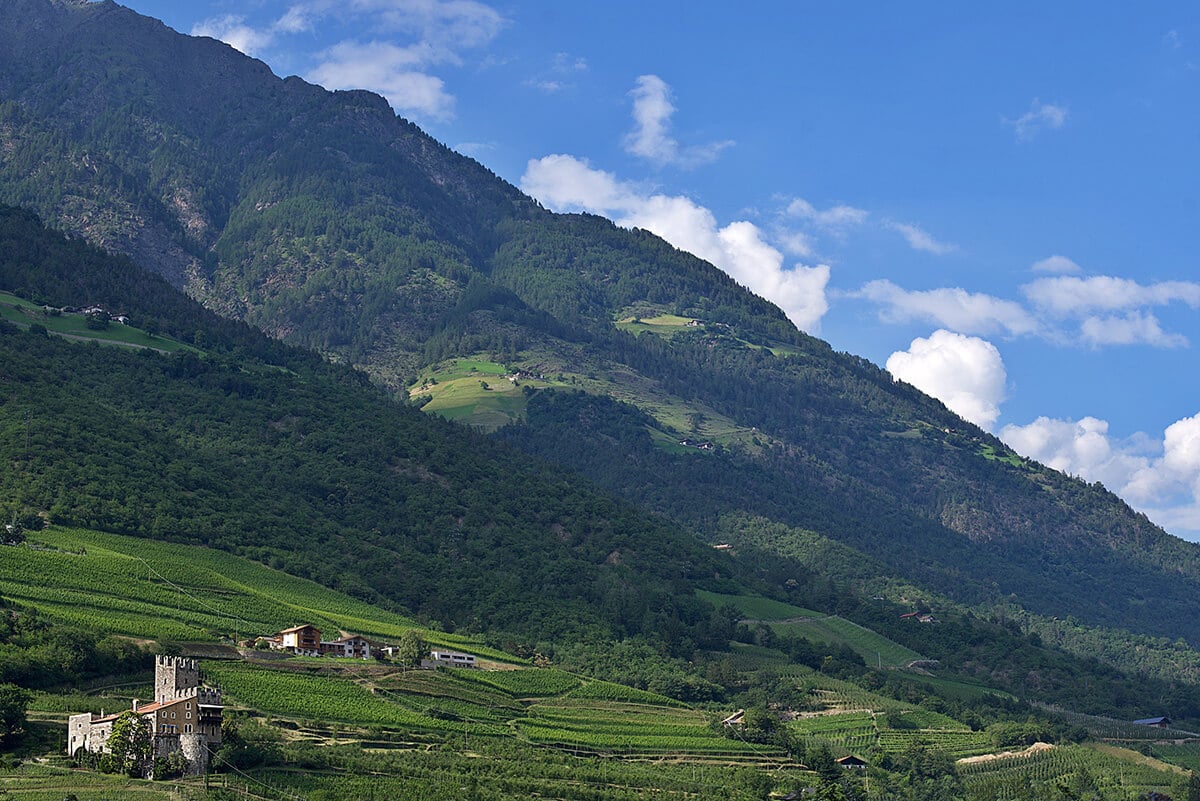 Tibet around the corner & Yaks

There is Italian very own Tibet just around the corner from Naturns. It is close to Reinhold Messner’s property near Ortles. The man is cultivating yaks, the Tibetan oxen, there. For the last ten years the summer transhumance of the yaks with Reinhold Messner da Solda at the foot of Gran Zebrù has become an appointment open also to the public, a way to raise awareness of the importance of mountain agriculture, to bring back the ancient traditions, to promote the South Tyrolean valleys.

Read more about this area here